This oar is being made by Rory Cowan in Arran.

This oar is light to row with. It is the only spoon blade made from plans by someone other than the designer of the spoon.

The oar I was asked to build was the design 7 4.3metre oar built totally of Western Red Cedar outboard and attached to an oak inboard with the side fitted Ullapool pin and dome oarlock system made in purpleheart.
Buiding the oar was relatively simple in theory once a few definitions were sorted.  For example I was building a box section outboard and it was not clear initially what dimension was being referred to as the flange and what was the web.  That said the answer is that the box section is viewed as a split I beam on it's side with the web split into the two box sides and the flange top and bottom - then the whole thing turned on its side because the edgewise bending loads of an I beam oar are taken on the web rather than the flange.  So with that sorted I was in a position to cut out the parts.
This was to be a hollow oar outboard with an oak inboard.  The timber was cut from 180mm by 20mm boards and whilst I had thought that the WRC was rather expensive to buy, I saw an opportunity to resaw the components to get a 6.5mm board for the web and a 12mm board for the flange.  I cut this on the bandsaw using a massive clamped fence which did the job well.  I then cut the webs to planform size and planed by hand to the thickness profile which worked out to 11mm tapering to 6mm from the middle of the oar.  The webs were put through the thicknesser.
I glued up one flange and a web to a U section, added the oak reinforcing at the pin position and turned the oak handle on the lathe to 40mm diameter. ( I could only turn 34inches in the lather hence the need to form the oak in two parts.)  I joined the handle of the oar to the oak mid section using a double wedged scarf and glued it well with the trusted old epoxy. 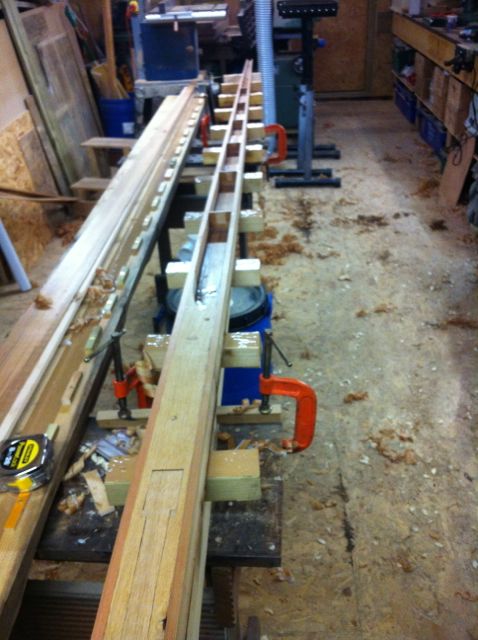 (Note the spar bench made out of a length of 8" by 2" and with 2" by 2" cross pieces every 200mm.  This kept the loom level and allowed easy clamping access all along and around the oar)
I then added dwarf bulkheads at 300mm intervals to deal with any tendency for the oar to twist in a seaway and then put the lid on having liberally coated everything in epoxy.
Once dry the western red cedar was faired into the oak handle shape and the blade end of the oar was shaped to take the spoon blade (Topher's design).  This was rather more tricky than I had anticipated as the blade tended either to sit too proud at the inboard end or the outboard would sit too far forward.  In the end I elected to let the outboard end sit well forward reasoning that at the catch the blade would be more near to the normal to the boat centreline than if the inboard end was closer to the loom. (this turned out to be a correct decision)  To wrap the outboard end of the loom around the blade I cut slots in the oar in the plane of the blade so that I effectively could work from a solid outboard to a laminated outboard in order to take the curvature of the blade wrapping the outboard end of the loom around the blade.  I also cut a vee shape in the aft edge of the loom for the length of the blade to accommodate the vee shape of the blade into the loom.   Well, the road to hell is paved with good intentions and of course when I tried to fit the loom end to the blade I found the only knot in the whole oar and managed to break the outer laminate.  So I glued it anyway  (when it wasn't looking) and once it was all set, I planed the broken piece off and added two separate laminates to strengthen the outer end of the oar.  That worked out OK and looks as though I meant to do it in the first place!
Inside the spoon of the blade I added a 'diamond' section strip to cover the join of the two sides of the blade and to give it a little more longitudinal stiffness.  Whether it was necessary or not I have no idea but I felt it added a bit of strength where it was appropriate.
So after that it was all sanded and epoxied and then varnished.  There were a few blemishes visible - like oversanding of the blade, however I elected to varnish so that I could see what was going on - if anything decided to 'go on'.
Overall this took about 22 hours to make though some of the time was expended on the voyage of discovery - say 5 hours.
My personal view is that this is an ugly oar, light, well balanced but vulnerable to damage because the western red cedar will bruise too easily.  On the Clyde we seem to be less friendly to our oars than the more purist strains of rowers to be found elsewhere.  We do not tend to row in lanes avoiding contact with all others - rather we row together and yell for water at marks and there is also the odd novelty race where it is inevitable that 'boats will meet'.  For that reason I feel that oars should be able to take some modest abuse.  Western red cedar is not the oar timber to take abuse at all, however modest!

So how does it row?  The oar was well received by club members.  They liked the UHF and the overall weight of the oar except in a good chop.  With anything of a sea going, the preference was for our Macon bladed original oars which weigh in at around 8kgs!!  They are not so well balanced but they do have the 'authority' to punch their way through errant waves on the recovery stroke - this new blade stops on encountering such a wave which can be most disconcerting.  Noting that the loom of the oar is a box section, in a wind the oar felt 'wavery' during the recovery stroke - I presume that this is the shedding of alternate vortices above and below the loom (a Karman Vortex Street) and since the oar is very light this can be felt by the rower.  Does it matter?  Probably not.

In smooth sea, light wind conditions this oar is a dream to use.  We set the boat up exactly level and were able to balance rowers each side of the boat and noted that this oar seems to grip the water better and gives a definitely greater pull so that the boat tended to turn in favour of the new oar.  We swapped people around between oars quite a few times and there is no doubt in our minds that the new oar with the spoon blade delivers more power than the others ie it grips the water better.

So, overall how does the oar fare -  probably an 8 on the oar rating scale.  We do have one which scores 9 but this is an 'unacceptable' round section oar of birdsmouth construction with a macon blade.  It is quite heavy at 5.5 kilos, but if I made another I could take at least a kilo out of it and with a 3+ kilo UHF (which I could reduce as well).  But then I made that before UHF became fashionable.
The reason for an 8 and not a 9?  Well, whilst the WRC oar is quite superb on flat water with nearly no wind at all, it does not perform so well in a seaway when there is quite a bit of wind.  So to be competitive, one would need to have a couple of sets of oars, this one for flat calm, nil wind and something a little more hefty for heavier weather.

Hopefully I will have managed to upload 3 more pictures of the WRC hollow outboard / oak slid inboard design 7 oar.
Purpleheart dome plate box broke because i had not anticipated the twisting force applied by the hands of the rower over the top of the oar.
The finished oak handle shaped for the scarf and just out of the lathe.
The finished oar.

No it did not upload.  Try again. 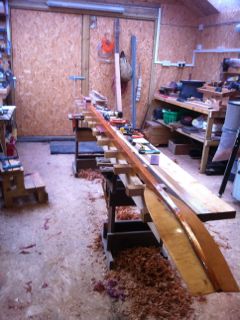 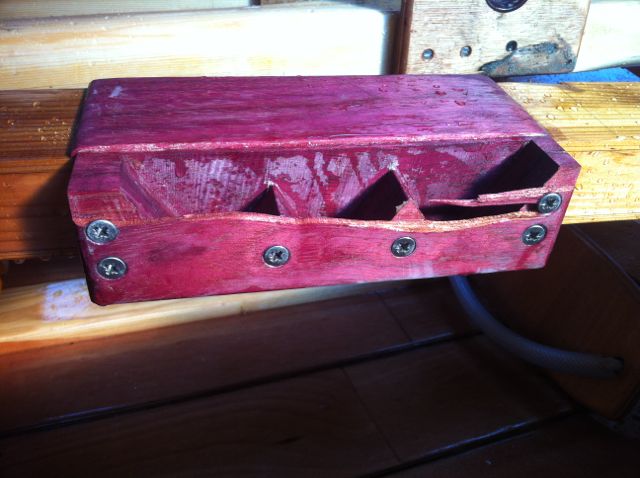 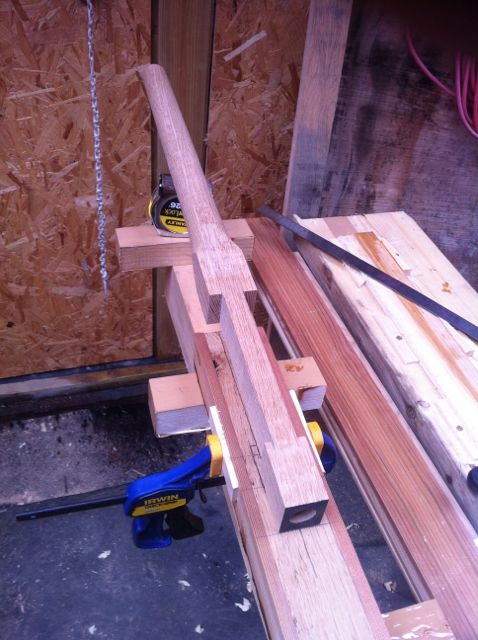