Concepts for the new design

Concepts for the new design

I have made this category for people to consider in broad terms what possible ways we can design a new oar which is better than all the oars we have measurements for.

Overall weight does not seem to be too important as long as we can keep the UHF down towards 2kg, which is about half of most of the current oars.

Stiffness of current oars so far is in the region of 80mm deflection and I think that this is stiff enough.

What it all boils down to is how to make the outboard shaft and blade light and still strong and stiff enough.

Posts in this forum are for proposing basic concepts to achieve this.

There is a Finnish company who make laminated spruce oars and it turns out that it is a Dutch guy who owns it. I spoke to him tonight because I wondered if he could supply oar shaft blanks and we had a long conversation.

Basically he thinks we are using oars which are far too long. I explained that they were that length because of the clashing problem, basically caused by rowing the boat in non traditional way, with 4 sweep oars.

A phone call with the designer Iain Oughtred confirmed that there were many possible ways to row the boat with traditional oars 10ft 6 inch (3200mm) long, but none of them are the way we row the boats now.

This is a page of the book The Shetland Boat by Adrian Ostler: 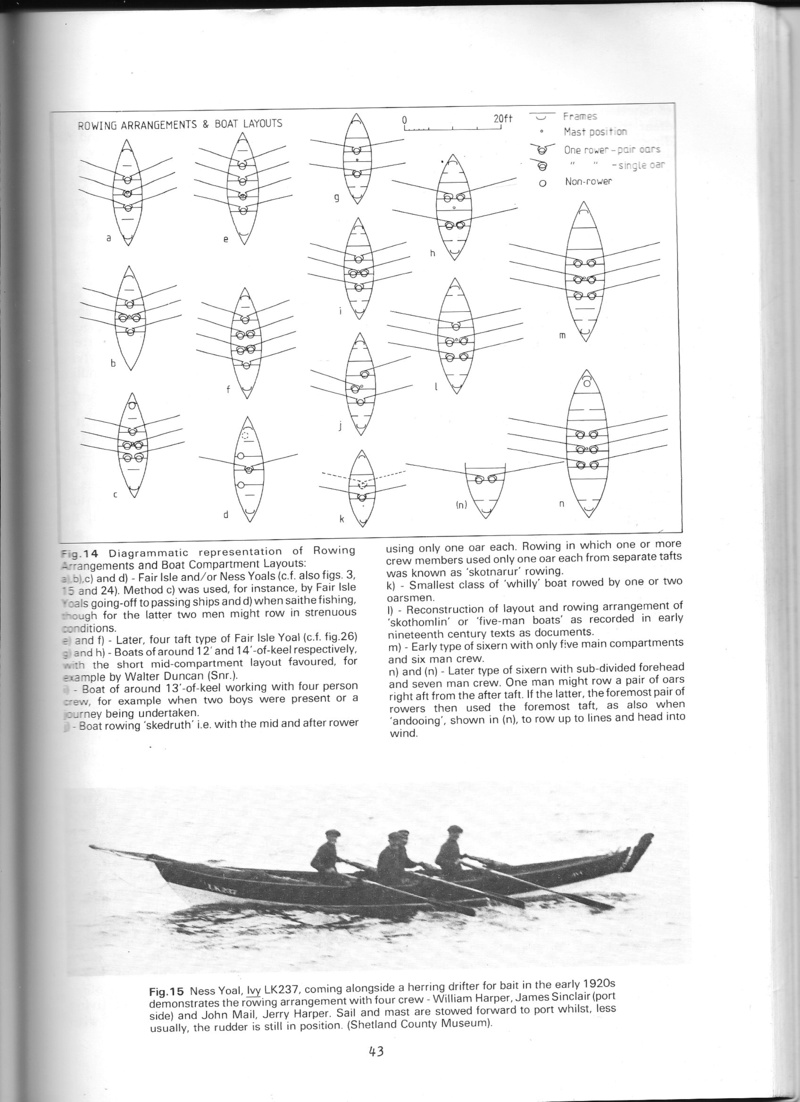 You will see that Fair Isle skiffs were rowed as in drawings a, b, c, d, e and f.

Perhaps we need to go back to basics and try rowing with 4 rowers and 6 oars, or 4 rowers and 8 oars? When the weather improves I am going to try 8 oars.

It's definitely been done! Have a look at Boatie Blest at around 3:30 in this video:
https://www.youtube.com/watch?v=_0ddqs5m4Fw

Looks fast I must say!